I am not worried about Friday’s 666-point drop of the Dow Jones Industrial Average (DJIA). I feel better about the health of the market with the past week’s retreat than I would otherwise feel had it not occurred. Taking a bit of pressure off of a rapidly heating market is not a bad thing. But people tend to worry. Or at least people tend to express concern. I did field a lot of calls and messages on Friday. The great thing about calls and messages from clients was that they were all reasonable, even-keeled, and well-informed. That makes me feel great about the work I do with clients, or at least feel great about the way clients feel about the work I am doing on their behalf. Calls and messages coming from folks that are not clients? Not quite so reasonable, even-keeled, or well-informed. If for no other reason than times like these, I wish everyone would, or could, work with a professional advisor.

So I had an internal debate raging all weekend. Should I comment publicly about the market’s weekly decline? Should I let it slide as normal market behavior, comfortable that Lake Jericho clients “get it”? Honest client concerns aside, it has become increasingly difficult to tell when some folks are genuinely worried about market conditions versus when some folks are simply glomming to market conditions as a type of political wedge. Thus the internal debate; what are Lake Jericho clients, my friends, my family, truly concerned about, versus what is it that I see in market sentiment that is just hyperbole, and what, if anything, should I state professionally?

First, my primary concern is with Lake Jericho clients. And to address client concerns, why am I not worried? Easy answer. Perspective. Some investors are focusing on the eye-popping 666-point, one-day decline alone. Humans are built of inherent biases, mental short-cuts, among which is our conditioning to evaluate absolute numbers quickly and short shrift the relative analysis. It is a type of anchoring bias in which we hear a number and react, often without an appreciation for what the number itself might currently mean. Headlines (or Facebook posts) fuel those biases, shouting “worst day since Brexit”, “biggest weekly drop in 9 years”, “my 401(k) lost thousands”. But the headlines are intended only to grab your attention, not intelligently inform. So the headlines flame feelings, people seek no further insight, and all perspective is lost. In proper historical perspective, the Brexit impact reversed in less than 48 hours, the DJIA has doubled in 9 years, and it is likely that your 401(k) has far more than doubled in recent years. Absolute headlines are not reflective of relative experience.

So let us add some perspective. When the DJIA dropped 508 points on October 19, 1987 it amounted to a drop of 22.6% on one day. When the DJIA had its worst single-day decrease of 679 points on October 9, 2008 in the midst of the nation’s financial crisis, that was a 7.3% one-day drop. By comparison, Friday’s 666-point drop was a 2.5% decrease because the absolute value of the Index has climbed so much in the post-crisis recovery. For the week, the DJIA declined 4.1%, the S&P 500 shed 3.9% from its all-time high last Friday, and the Nasdaq Index fell 3.5%. To geek out on the statistics a bit, with a 10-year standard deviation of 14.2%, Friday’s 2.5% drop might be less-than-common but it certainly should not be considered abnormal. What has been abnormal is the lack of meaningful pullback during the past 18 months. When last week opened, the market had run 400 days without a pullback of 5% or more. Friday’s 2.5% drop should be taken more as a sign of return to normalcy than a worrisome deviation from the norm. Even so, one trading day does not mean that the nine-year bull market in stocks is dead.

A 100-year history of the Dow Jones Industrial Average:

When we picture last week’s move in historical perspective, we can see that it is hyperbole that drives our perception. In reality, Friday’s move barely registers on the scale of  historical volatility. 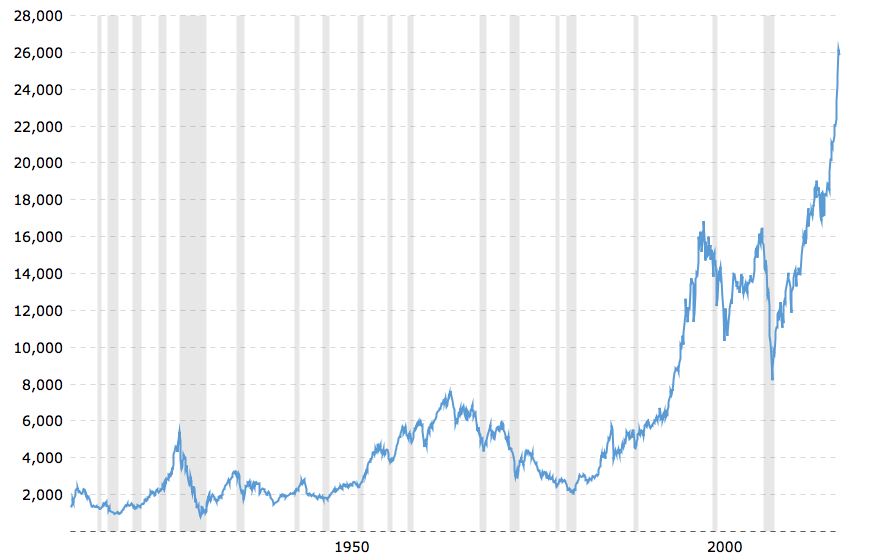 100 Years of Daily Moves in the DJIA: Source Macrotrends

Second, and as I’ve been saying in quarterly Recap’s for a while, the fundamental factors that have driven stocks higher — improving global economic growth and rising corporate earnings — remain intact. It is widely expected that corporate earnings will continue to grow by double digits, especially now that the U.S. tax reform plan has cut the federal corporate tax rate to 21% from 35%. Market internals (those measures market professionals use to evaluate the health of markets themselves) showed no signs of panic selling. General market consensus, and our own internal view, is that this pullback represents a good buying opportunity rather than a reason to sell. And buy, where able, is exactly what we were doing on Friday.

Third, about hyperbole and political wedges? I mention the third-rail of politics in this discussion because one can hardly assess market sentiment these days without a grasp of the narratives that drive particular views. If it is true that politics makes for strange bedfellows, then it must be true that objectivity about politics makes for no bedfellows at all. But if I can’t be objective, then I cannot do my job. I am fond of saying that “the truth is typically somewhere in the middle”. Given the tribal polarization of media coverage today, that saying has rarely been so true as it is now. To properly evaluate current market conditions, I must filter out the biases and objectively evaluate facts. It seems that if I am widely reviled by both sides of the political spectrum, then I am capably doing my job. I encourage everyone else to attempt the same.

So what is happening? Why did Friday happen? If you will recall from Lake Jericho’s Q4 2017 Recap posted just last week, we speculated that were there to be a metaphorical fly in the ointment of this market that it would come in through the window of interest rates, currency rates, or commodity values. Last week’s main sell-off trigger was growing concern about inflation rising more quickly than expected and therefore interest rates more rapidly increasing, and both of their impact on stock values going forward. The economy’s growth already has pushed up market interest rates. The yield on the U.S. Treasury’s 10-year note hit 2.84% on Friday, its highest level since 2014. Lake Jericho has defensively positioned client accounts against gradual movement higher for some time. Rapid, unanticipated movements in rates are exceedingly difficult to defend against.

Concerns about rising inflation and a corresponding increase in interest rates were heightened by the Labor Department’s U.S. jobs report released Friday showing the largest year-over-year percentage gain in average hourly wages, 2.9%, since June, 2009. The report also showed sustained low unemployment in January at 4.1%, and that employers added 200,000 jobs last month. All of that data further fuels the narrative that inflation is picking up. This has always been the market’s concern with the Trump administration’s myriad of pro-growth strategies; though enthusiastically welcomed by corporate America and investors alike, it might simply be too much and lead to overheating of the economy. Rapidly rising inflation could lead the Federal Reserve to move more quickly in lifting interest rates to keep inflation in check. Increases in interest rates puts upward pressure on business and consumer borrowing, where rates could trend higher for home mortgages, auto loans, business loans, and other personal and business big-ticket purchases requiring debt financing. Despite rising corporate earnings, rapidly rising interest burden costs could offset those gains and cause investors to rethink the long-term value of the stocks they own. Further, if interest rates in the U.S. were to increase at a faster rate than those in other developed economies around the world, a resulting impact could be a rapidly rising value of the U.S. dollar. A stronger U.S. dollar could also negatively impact the earnings of large, multinational U.S. companies as they translate those earnings back into dollars. A stronger dollar could also make it more difficult for smaller U.S. companies to sell goods and services overseas.

To wrap all of this up in a tidy little package, I will remind folks of stuff that I talked about a great deal during late 2015 and early 2016. The predominant theme then was that as markets adjust to new or changing expectations there will be price dislocations and market distortions. The market is wise and all-knowing, but it takes a while to figure itself out in the light of new information. This past week has been a process of assimilating new information. What we experienced was natural volatility. And frankly, a return to some natural volatility that we knew would be coming back eventually. As I said in the Q4 2017 Outlook, I see nothing yet on the near-term horizon that meaningfully changes my expectations. I expect to see last week’s volatility fall a bit throughout Monday’s market and settle lower into Monday’s close. If this happens, it will prove to be an excellent opportunity to put more money to work. If I am wrong, and volatility continues to increase during the week then we will have a different set of decisions to make.

Regardless, rest easily knowing that I am watching all of this and ready to act when necessary. If necessary.